For a Health Makeover Excuses Are for the Weak 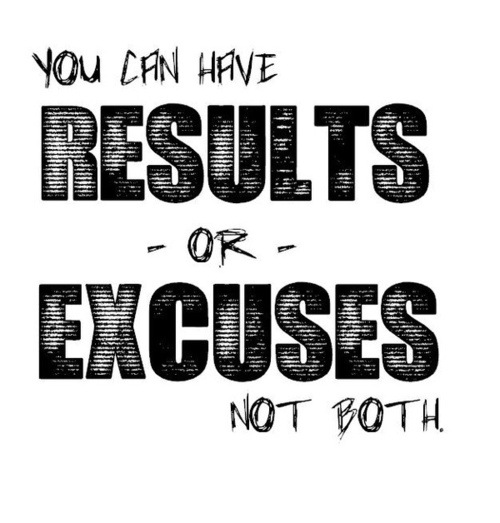 If you’ve ever used excuses to avoid taking action to improve your health, you were likely working under an illusion.

Excuses can seem valid at times, to the point where we end up believing they are absolute truth.

“People with this condition don’t get better, so I’m just going to nurse it.”

However, excuses can not only cause us to miss out on healing, they actually have the power to destroy our lives when we let them.

When we talk ourselves out of doing things we need to get healthier, we create a powerful downward spiral of decreasing health, dwindling energy, and diminishing self-respect.

Don’t let your excuses destroy your health!  Excuses are not for people like you, reading from this website, seeking how to get an instant health makeover. Excuses live in weak-willed individuals who have a fake desire or get better, but don’t really want too.

They have talked themselves out of creating true health, which is really a simple process, and they probably won’t budge until a life crisis forces them to.

Want your health condition to run you over? Or would you rather be someone who laughs at diseases and ailments?

People who use excuses, say phrases like these often:

How many times have you said things like this or heard others say stuff like that?  They are excuses, plain and simple.

Here’s the worst part: even if an excuse actually holds some merit, like if you really don’t have time to dedicate to exercising, the excuse itself prevents you from even TRYING and working toward the goal in some way.

Starting today, take a good hard look at your excuses regarding your health. Are they really true, or have you been fooling yourself because it seems easier?

If you question the beliefs you hold about your health and your capabilities, you might be surprised to learn that you’ve been held hostage by yourself.

The thing is, you formed the excuses, you can easily dismantle them as well. Take one step at a time, one faulty belief at a time.
When you begin doing this, even in small ways, you begin to develop greater strength and commission within yourself, and your whole life, not just your health, will begin to shift and change in miraculous ways.